Skip to content
HomeThe truth behind the KF SSI

Our previously planned post has been postponed and will be published in the next few days.

There is new explosive information! Sousan Alexander posted this on Facebook: 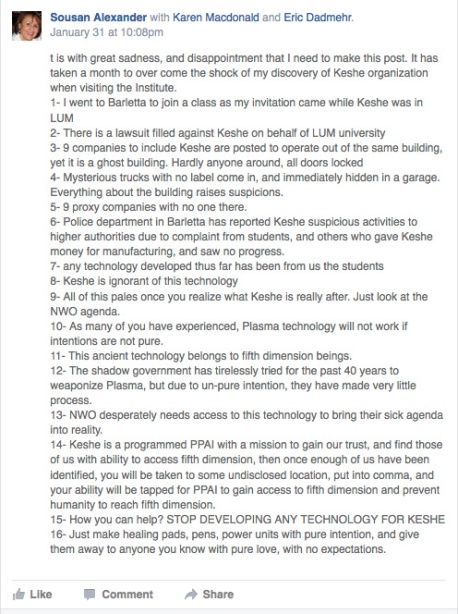 Given this new first-hand information, we have to doubt EVERYTHING that Keshe ever said! At this point it is even unclear if he really is in Dubai, he could be hiding anywhere!

Be aware, and stay away from this incredible, criminal, dangerous and unethical deception called the Keshe Foundation!

In his incredible arrogance, even now that he had to leave Italy due to police investigations, Keshe replied to Sousan publicly in the 3rd international knowledge seekers workshop:

“The lady who came to Barletta, and thought she’s very clever, we know why you came, that’s why we never met with you and we didn’t let you in the classrooms. You took money from people who paid you to come, and you came for a holiday and have you return the money because we didn’t let you educated. Because your plan wasn’t to educate. The plan was to come and discredit, and you got discredited.”

We see total denial from Keshe, and again he is attacking those who speak the truth, rather than admitting his own wrongdoings. What will Keshe’s future be like, we wonder… 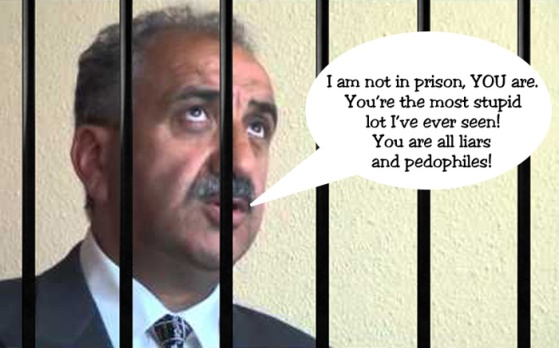 Another power unit testimonial can be found here. It works!

And keshefacts.org was mentioned in this video. Seriously, we don’t know how to handle the fame! Because as you know, keshefacts.org has AT LEAST hundreds of thousands of visitors around the world, and throughout the universe! 😉

Interestingly, someone else has also started a world peace campaign.

The same hypocritical scaremonger who tells you “DO NOT BE AFRAID!” has ordered the following to be posted, in order to scare people AGAIN:

“Get the warnings out and mail to your ambassadors to inform the governments to get the alert out so people can get to safe areas to tv stations radio stations bombard them to get the people informed. It starting very slowly but it has started move far away take what you need no more but extra food medicine clothing to keep warm and you gans and nano coated material you want be able to return just keep on going as far as you can. Don’t forget your animals if you have that at least they can survive on the mainland.”

Obviously someone is desperately in need of attention and money. Right, as if ANY government would listen to this nonsense. Don’t worry people, it’s just yet another false alert. Creating fear in order to control KF cult members and potential new followers.

Regarding the planned “council meeting” in Dubai, we have to wonder why Keshe said it would not be broadcast. Secret meetings behind closed doors ? Is this the future of humanity ? No, this is what we already have. One would expect an “enlightened peace council” to do better than that, but then again we are not surprised by this move. Now that the KF has been exposed as a fraud, it can only operate in the dark. Talking about transparency, but hiding in the shadows. But who would not hide, when people put together rusty coils and call it a spaceship. So delusional. But maybe there is something else planned there… secret occult levitation teachings ?

This new conference reminds us of the previous meeting which was held in Bari, Italy. Back then it was only a few people, the meeting of the “core team”, which will now NOT become the “peace council” after all, neither will they replace the UN, have influence on politics, or meet any “members of the universal community”, despite of all those promises. That previous meeting was held at LUM university, the former hyped KFSSI building, where Prof. Gianfranco Liuzzi was used by Keshe to show a health device, in order to create a hype around the KF. The video of that is still on the web, you can watch it. Unfortunately, as Keshe does with everyone, he later slandered Prof. Liuzzi, so Keshe got kicked out of LUM and a police complaint was filed against Keshe for suspicious activities (see above). On a side note, the hotel rooms and other expenses for this event were NOT paid by Keshe, but by Soheil. Keshe borrowed the money from him, but never paid him back. When Soheil had enough and decided to stop working for Keshe, Keshe got upset and hypocritically said “Now he loses his income.” But Soheil never had any income, he produced all the KF products without ever getting paid by Keshe, so he had big losses. This is how Keshe uses and abuses people and later attacks them. This is how the KF works and thrives: making money on the back of other people. Now who will be exploited to pay for this new meeting in Dubai ?

This time, instead of 12 people, Keshe plans for UP TO 2000 (!) guests. He once again announced “high-level security checks”, just like he did last time for the Bari meeting, where he also announced patrolling military helicopters, and then in reality there were 1 or 2 policemen standing around, occasionally checking passports, but most of the time not paying attention at all. This is Keshe’s fantasy versus reality, ladies and gentlemen! Incredible big words to cover up all his fantastic stories, which are nothing but hot air. Now he attempts once again to restart his scam story in another location, until he gets caught again. But this time it will happen rather sooner than later, because there are too many people who have been scammed, lied to and slandered, and too many people whom he owes money. And whenever someone speaks the truth, Keshe calls that “terrorist activities” or “mayhem”, and announced that our website will be “wiped out” !!! Welcome to the “correct ethos” of the Keshe Foundation!