In the 338th KSW, Keshe confirmed the satanic nature of the Keshe Foundation, by reporting that he got divorced from his wife Carolina De Roose, and that she is part of a satanic sisterhood. Seriously, didn’t he know that already, when he himself explained satanic hand signs to his followers ? 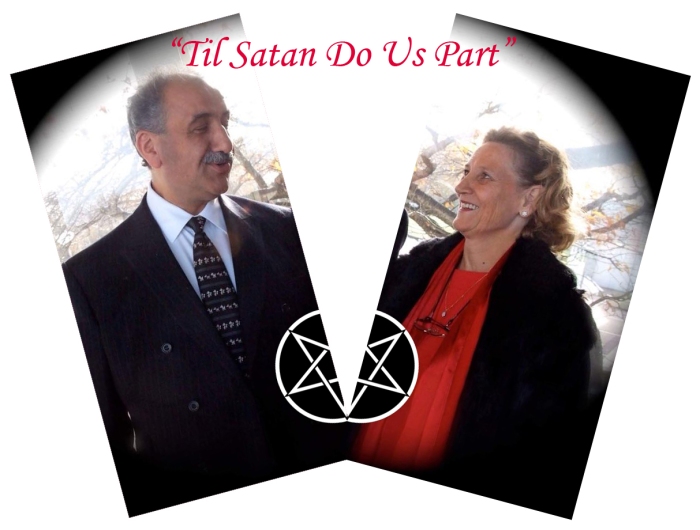 So, Keshe has been married to a satanic and crazy woman for years, and yet he continues to pretend to be the real Messiah ? He pretended to work for the good of Humanity while he was with her ? Wow, that must have been a very dysfunctional marriage.

Doesn’t Keshe recall how much he was in love with Carolina? He even named part of the Earth’s core after her – the Caroline Core !! Because she was the core of his being! And now she suddenly is satanic ? Is the Earth’s core also satanic now ?? LOL !! Does it mean that the Earth’s core will be called “the satanic core” ? This must be Keshe’s wet dream!

This strange divorce announcement comes after YEARS of them both running their scam together as close allies. It seems that now that his favourite Belgian scapegoat is no longer around, Keshe needed a new enemy, because he cannot be at peace with himself and with the world around him. And since he always hated Carolina (as we have learned long ago), it was probably very easy for Keshe to dump her, as he has always dumped each and everyone who criticized him in the past, and even those who supported him the most!

It might also have been another distraction, pointing fingers at Carolina, so that Keshe himself doesn’t get blamed. Keshe even called his ex-wife “worse than Sterling (Allan)”, indicating that she is involved in pedophilia. But is Keshe himself not involved in it, after having been married to her for so long ? In the past he often rambled on about the fact that in some countries it’s legal to have sex with underage girls, as if he was jealous of it. Heck, he even got involved in a pedophile cult himself. (see here, here and here)

These days not many KF followers know that Keshe was already going to dump Carolina a few years ago, when he was in love with another woman. But since that person didn’t play along, Keshe remained stuck with Carolina… until now. So much for Keshe’s love and loyalty to the Caroline / Core / Team !

When Caroline asked people to dump poisonous GANS into rivers and oceans, it should already have been clear that her intentions were evil. Keshefacts pointed it out when it happened, but KF followers ignored all warnings, and continued to consume GANS. One of the results of this insanity was the death of Sandor Kakasi, who poisoned himself with GANS over several years and therefore developed cancer.

Now Keshe even asked the members of the “Golden Age of GANS” Facebook group to completely block Carolina, because according to Keshe, she will try to ruin all of the members’ families. In doing so, he tries to prevent Carolina from dividing the Keshe Foundation community and from receiving the money donations that he usually receives. We wouldn’t be surprised if next time Keshe declared that Caroline has always been a satanic pedophile who runs a pedophile network in association with Sterling Allan, the King of Belgium and Jeffrey Epstein. Inside Keshe’s disturbed mind, everyone who disagrees with him is a pedophile. Everyone – except himself. What’s the cure ? A tablespoon of GANS a day keeps the Pedobear away ? LOL! Or does GANS attract the pedophiles ? After all of Keshe’s talk about this subject, one has to wonder.

But seriously, who will now receive all the donations ? And who will run the manufacturing arm of the KF ?

Doesn’t Keshe realize that by making such claims, he completely destroys his own credibility ? Is this not being seen by his followers ? Wake up SHEEPLE !!! What is the REAL nature of the Keshe Foundation ??? Come on, EVERYONE should realize the truth by now!

Does anyone remember the image that Dirk had put on the last page of his KesheFacts e-book in 2017 ? A modified KF logo, saying “Keshe Satanic Foundation – I take thy soul”. Dirk was right on the spot, even 3 years ago! 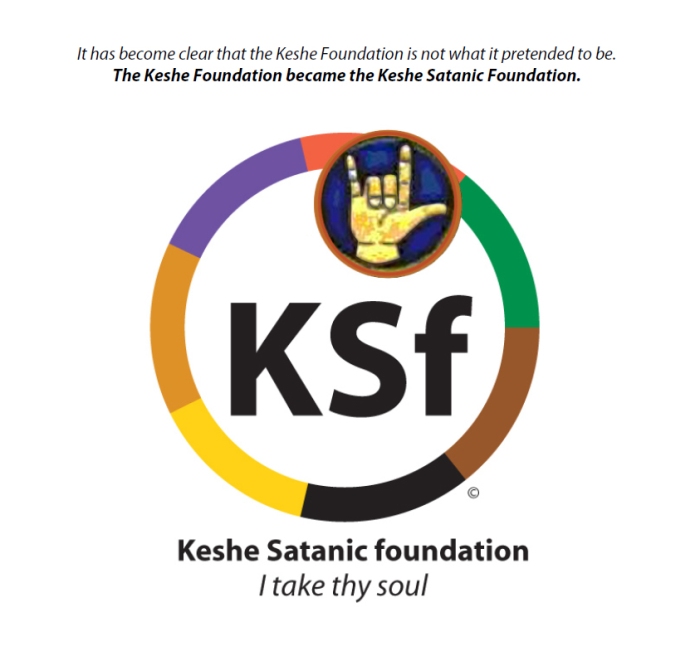 So the main question is: Is this divorce story even real ? Did they really get divorced ? And if so, what was the real reason behind it ? Is it just another set up to fool their followers ? Did Keshe need a new enemy, since cults only thrive as long as they have enemies ? Who is the satanist in this game – or rather: who isn’t ?? Or did Carolina just notice that Keshe can no longer provide her with enough financial (and other…) support ? Stay tuned for the next episode of this soap opera!

And DON’T EVER blindly believe what Keshe or Caroline or any of their greedy merchandise clowns tell you. They haven’t been honest so far, why would they start now ?

There are plenty of false and even ridiculous COVID-19 “cures” being used in Iran. Let’s take a look at some of them.

Wikipedia has a list of unproven methods against COVID-19.

Please note that on that list there is also the notorious “MMS” by Jim Humble, another one of Project Camelot’s darlings. This “MMS” is as dangerous and poisonous for the human body as “GANS” (see here, here and here). Yet many people still fall for both substances.

Someone on allmystery.de said it very well: Keshe is just a symptom of stupidity. People like him only thrive due to the stupidity and lack of knowledge of their followers. How ironic that Keshe’s workshops are then called “Knowledge Seekers Workshops”. They may SEEK the knowledge, but definitely won’t find it in the KF.

It’s all one huge brown mess (“brown” referring to the far right propaganda scene, which includes ufology cult groups (represented for example by wannabe cult leader Kerry Cassidy), the free energy / world peace scam scene (of which Keshe is a prominent member), racist movements of any kind, disinfo media such as Veterans Today (also called “fake news” for obvious reasons), as well as pretty much anything that defies logic and common sense).

How come all the “free energy” and “ufology” related groups are all about “love and peace”, but have never shown any working free energy devices ? Instead they run endless scams, and instead of spreading love they slander those who won’t worship them. How come most of their leaders end up in prison ? (We might dedicate a whole new post to that subject at some point)

How come Gordon Duff claims that for Keshe’s technology, no money is being asked for, while his non-working merchandise toys never get delivered, BUT the KF won’t ever get tired of asking for donations ?

Maybe Keshe’s followers should smarten up a little bit, and make those donations in plasma form. This way, they won’t risk losing all their savings, the way many others did. Let’s take Keshe’s darling Armen for example. He lost $200.000 because of Keshe, but STILL follows him!

Oh well. Sit back, enjoy a cup of tea, and read some VT. Does it really matter where the disinformation comes from ? As long as you BELIEVE whatever your cult leader says, everything will be fine, right ?

Isn’t it about time for all those blind followers to wake up and to use their own brains (if available), rather than believing that ANYTHING has been “made great again”, when the FACTS show a completely different picture ?

Enjoy the GANS and the camel piss everyone! According to Iranian “experts” the like of Keshe, both will protect you from COVID-19 as well as from the dangers in deep space. 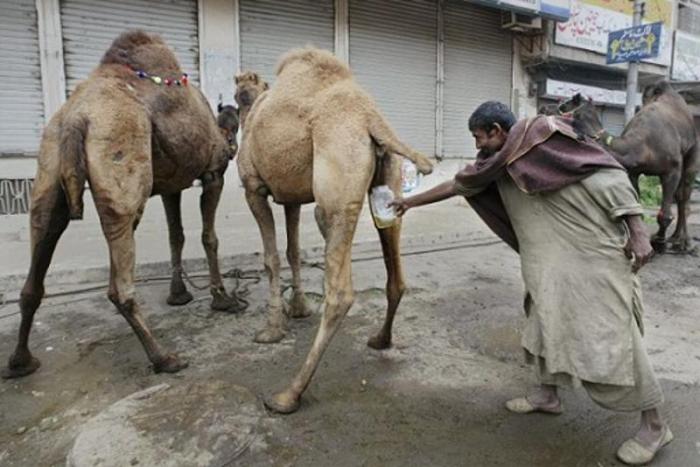 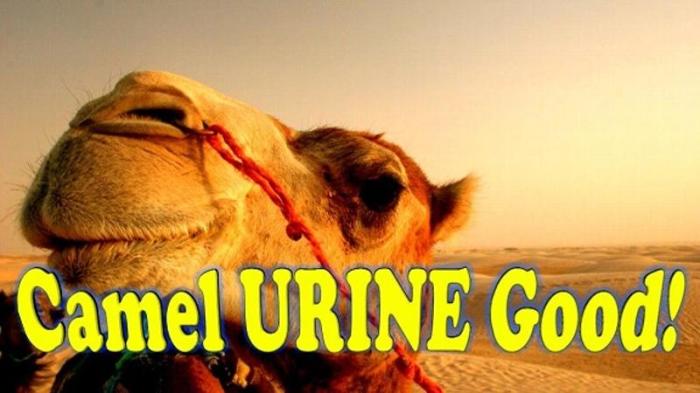 (Disclaimer: We do NOT encourage the intake of either GANS or camel urine, as both are harmful to the human body. The above statements are merely meant as a parody.)